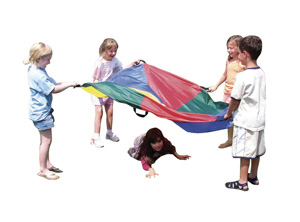 The end of the school year means more sunshine and fun outdoors. Start the summer holidays with our bright and colorful parachute, and save 15%* when you order it this week with promo code PCHUTE2! The parachute comes in two different sizes—our 6-foot parachute fits up to 6 (pictured left) and our 12-foot parachute (pictured at the bottom) fits up to 8 children for play.

Parachute Play has something for every child. You can teach colors, peer play, and basic prepositions of “over” and “under”. Children love sweeping the parachute up in the air and watching it flutter down. Best of all, it’s just plain fun for all of us!

And if you’re feeling like you should be focusing on school readiness and not play, the Parachute can help there too! You can download a copy of our Modified Instructions for Parachute Play written by our BCBA Sam Blanco for a variety of games modified for learners of different levels. Below are also some of Sam’s tips on various skills that can be reinforced with the simple yet wondrous parachute:

Don’t forget to save 15%* this week only on your Parachute when you enter or mention promo code PCHUTE2 at check out!

*Offer is valid until 11:59pm EDT on July 8th, 2014. Not compatible with any other offers. Be sure there are no spaces or dashes in your code at check out!