This week, we bring you a guest post from Martha Gabler. She’s going to share her experience with using an acoustical support to mark desired behaviors known as Teaching with Acoustical Guidance (TAGteach). The sound made by the acoustical marker (the click or ping) is sometimes referred to as a “tag.” TAGteach is based on the scientific principles of Applied Behavior Analysis and uses positive reinforcement and reinforcement schedules to build functional behaviors.

Hello. My name is Martha Gabler and I am the parent of a nonverbal teenage boy with autism. The purpose of this article is to introduce you to another type of support for children with autism that is coming into practice, and to ask you to consider it. There are many “supports” available nowadays for children with special needs. Most people are familiar with the adaptive equipment for children with physical disabilities: special chairs, grips, work platforms. In the autism community, most people are familiar with visual supports: picture systems, schedules, token boards, and so forth. These visual supports play a crucial role in educating children with autism and have proven to be extremely useful in both home and school settings. 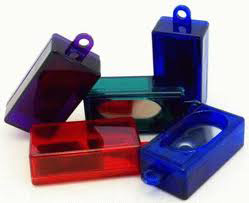 I would like to introduce you to another type of support: the “acoustical” support. An acoustical support is a neutral sound: a tap, click or ping. The acoustical support plays a crucial role in delivering positive reinforcement to a learner. The purpose of the sound is to inform a learner that he has done something right. The sound says, “YES, you did it.” The instructor, therapist or parent makes the sound at the exact moment that the child has performed a desired behavior. This behavior may be pointing to a picture of a cat, putting a puzzle piece into place, or, one of those rare beautiful flashes of meaningful eye contact or comprehension. As soon as the child has performed the task and the instructor has produced the sound, the child receives a treat (reinforcer). After a few trials, the neutral sound becomes a “conditioned reinforcer.”

Why is the Conditioned Reinforcer Important?

“A conditioned reinforcer is some initially meaningless signal—a sound, a light, a motion—that is deliberately presented before or during the delivery of a reinforcer,” explains behavior scientist, Karen Pryor. After a few experiences of hearing the sound and receiving a treat (reinforcer), the sound itself becomes meaningful for the child, and he starts to watch out for it. After the child is paying attention to the sound, he starts to pay attention to the behaviors that produced the sound. When he realizes that his own behaviors are producing the sound and the reinforcer, he learns to produce those desired behaviors more often. At that point, you have learning and communication. This use of a sound to signal success to the learner is called Teaching with Acoustical Guidance or TAGteach.

As a parent, when I started using a neutral sound (a click) to indicate to my son which behaviors of his would earn treats, he started doing more of those behaviors. My son was loud, chaotic and wild in the early years. He had self-stimulatory and aggressive behaviors. With my conditioned reinforcer (sometimes referred to as an “event marker” or a “tag”), I was able to tag my child every time he did something good. “Good” things were behaviors like Quiet Mouth, Both Feet On The Floor, Hands Still, or Eye Contact. The procedure is: Observe child, press clicker (tag) when child performs the desired behavior, then reinforce child (give a treat or token).

The first time I ever used TAGteach (acoustical support), my son had just erupted into a tantrum, complete with shrieking, stomping and storming about. I tagged every split second that he had “Quiet Mouth” or “Both Feet On The Ground, and handed him a tiny piece of candy with each click. Twelve minutes later he was sitting quietly and calmly on the sofa, and we were able to go about our day. It was an incredibly empowering experience for me, compared to all the previous tantrums when I always felt panicky, demoralized and helpless. I never feared a tantrum or meltdown again because I had a powerful tool to help him calm down.

My Son Became More Skilled and Happier the More I Tagged

The more I communicated with my son via tags and positive reinforcement, the more skills he gained and the happier and better behaved he became. Despite the lack of speech, despite the sensory issues, the click rang loud and clear and told him he had done something good. He loved it and responded beautifully. He had many difficult behaviors, but I was able to tag a split second of a good behavior whenever it occurred, with the result that the split second became two seconds, then three seconds, then four seconds of the desired behavior, plus it occurred more often. Gradually I was able to “shape” disruptive behaviors into positive learning behaviors, and he gained many useful skills.

The Tag is Clear and Precise with No Emotional Baggage

The reason the tag (conditioned reinforcer) works so well is because of the precise information it provides to the child. It tells the child, in real time, exactly what he did that was right, at exactly the moment he did it. From the viewpoint of a child with autism, he receives precise, timely information from a neutral sound; there is no emotional burden, language processing or sensory issue to deal with. Thus the child is free to focus on the priceless information he is receiving: the wonderful knowledge that he has done something right.

The Time has Come for TAGteach

The time has come for the use of acoustical supports in the autism community. There are many reasons: this methodology is based on the scientific principles of Applied Behavior Analysis; it is effective, easy to learn, easy to do and low cost. It is flexible, portable and wonderful for teaching in the natural environment. It is an invaluable tool for weary, dispirited parents, and for over-burdened instructors in the classroom.

Thank you for reading to the end of this article! In the beginning of the article I asked you to consider this method. I hope you are now interested in learning more about using acoustical supports for a child with autism. There are links below with more information. If you have questions, please contact me via the website below. Best wishes to you all.

Martha Gabler and her husband are the parents of two sons. When the younger son turned three, autism entered their lives. The method described above, using an acoustical support to mark desired behaviors, is known as Teaching with Acoustical Guidance (TAGteach). The sound made by the acoustical marker (the click or ping) is sometimes referred to as a “tag.” TAGteach is based on the scientific principles of Applied Behavior Analysis and uses positive reinforcement and reinforcement schedules to build functional behaviors. Martha’s book describing how she used TAGteach with her son is entitled Chaos to Calm: Discovering Solutions to the Everyday Problems of Living with Autism.

For more information about Teaching with Acoustical Guidance, see www.tagteach.com.

Written by: Different Roads to Learning on December 9, 2013.