Differential Reinforcement of Low Rates of behavior (DRL) is “a schedule of reinforcement in which reinforcement: (a) follows each occurrence of the target behavior that is separated from the previous response by a minimum interresponse time, or (b) is contingent on the number of responses within a period of time not exceeding a predetermined criterion” (Cooper, Heron & Heward, 2007).

There may be times when you want to greatly reduce a behavior, but don’t want to eliminate it altogether. Researchers have used DRL to decrease many behaviors, including: stereotypic responding (Singh, Dawson, & Manning, 1981), talking out in class (Dietz & Repp, 1973), and rate of taking bites while eating (Lennox, Miltenberger, and Donelly, 1987). 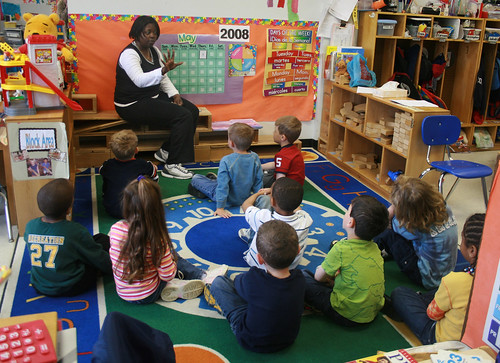 There are a few different ways to implement DRL. You might select a target number of times the behavior can be exhibited within a full session, then deliver reinforcement to the individual if they exhibit the behavior that number of times or less within the session. For example, Gina teaches in a preschool where they have a 5-minute circle time each morning. During circle time, a boy named Luke raises his hand constantly. Gina wants to reduce the number of times he raises his hand during circle time, but she does not want to eliminate the behavior altogether. She took some baseline data and discovered that he raised his hand approximately 12 times during each circle time. Gina decided that Luke would be allowed to go to the water table, (his favorite activity,) if he raised his hand 10 times or less during circle time. This is called a criterion limit. As his behavior decreased, she would decrease the number of times he was able to raise his hand in order to access reinforcement. Her goal was to get him down to 3 instances of raising his hand during the circle time activity. This procedure for DRL is useful in a classroom setting, because it does not require the teacher to take a lot of data or keep track of intervals, though that might be appropriate in other situations.

Another possibility for implementing DRL is to use an interval schedule of reinforcement. As in the previous procedure, you would set a criterion limit (like Gina did with the limit of 10 instances of hand-raising). However, for this procedure, you would divide the session into intervals and set a criterion limit for each interval. If the number of times the behavior is emitted meets the criterion limit or is less than the criterion limit, then the individual receives reinforcement at the end of the interval. So, Gina could use an interval DRL for addressing Luke’s behavior. In this instance, she might divide the 5-minute circle time into 10 30-second intervals. (I would suggest wearing a VibraLite watch or an interval app such as the ABA Interval Recording App to track the intervals.) Gina decides that the criterion limit will start at 2 instances of hand-raising each interval. If Luke raises his hand 2 times or less in an interval, then at the end of the interval she gives him a little bit of individualized attention, such as a pat on the shoulder or verbal praise.

When designing an intervention using DRL there are a few things you should consider:

Written by: Different Roads to Learning on October 29, 2015.