New York City’s Museum of Natural History and Museum of Modern Art (MOMA) are introducing special tours and experiences for children with Autism.

The Museum of Natural History’s ‘Discovery Squad’ meets on select Saturdays for children ages 5- 14, accompanied by an adult, before the museum is open to the general public. Specially trained museum guides will lead a 40 minute tour through the North American Hall of Mammals (ages 5-8) or on an adventure through the Koch Dinosaur Wing.

For more information on the Museum of Natural History’s Discovery Squad, please visit their website here. 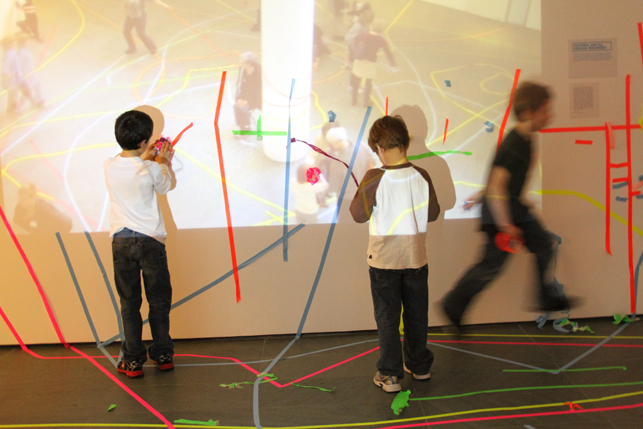 Each month the Museum of Modern Art’s program ‘Create Ability’ follows a different theme through the galleries to explore the art work and workshops to create in the classroom. These workshops are intended for individuals with developmental or learning disabilities ages 5-18+ and are free with pre-registration!

The folks at Tiggly are hosting an app-testing playdate for New York families with children aged 3 to 6 years from 10:00am–12:00pm this Wednesday, July 2nd, 2014. The play date will allow families to check out the new learning games and toys in development by Tiggly. In return, families will receive goodie bags and a chance to enroll in their Playdate Loyalty Program.

Space is limited, so please RSVP to attend the Playdate this Wednesday. Send an email to kate@tiggly.com to register and get more information on location and directions.

Tiggly Shapes combines the essential educational benefits of physical play with the learning potential and fun of the iPad. This simple set of four geometric shapes interacts with three free apps to create an ideal learning environment for children.

Tiggly Shapes melds the best of what the digital world has to offer with the developmental importance of manipulative play in toddlers and preschoolers. Seventy years of academic research has demonstrated that manipulating physical objects is essential to early childhood development. Tiggly enables parents to bring this critical component of early learning to the “digital sandbox” today’s kids inhabit. The product consists of a simple triangle, circle, square, and star that become interactive when used with Tiggly Apps to create a robust learning experience.

Eden II in New York has a wonderful Running Club for their students. We love the story behind it, the ease with which they implemented it and think it’s a fantastic idea for any school or agency as a way to get kids into shape and out into the community. Here’s their story:

In early 2008, Randy Horowitz, Associate Executive Director of Educational Services at Eden II tried to get the staff together to run for better health. Johanne and Chickie, both behavior specialists, thought it could be a good way to include both students and teachers.  And so, the Eden II running club began with a small group of student who were selected by age, weight and the ability to be outside without engaging in difficult behaviors.

Originally they had seven students aged 10 and above but the program grew as more parents found out about the club and wanted their children to participate in a mainstream activity.  There are now 58 members at two program sites.  A new club, the Pee Wee Running Club for students 5-9, began a year ago and already has 25 members.

Every parent is asked about her child’s daily routine and current level of physical activity before individual training plans are created.  The goals are kept very simple, “will walk 20 consecutive minutes before stopping to rest”.  A familiar staff person from each student’s classroom is assigned to work with him during training sessions.  That staff person is responsible for keeping the child safe and hydrated as well as modeling and prompting stretching techniques.  Most students quickly adjust to the routine of walking and jogging around a track or along the park’s running path.

Timers and verbal praise are used to encourage some students to continue walking orjogging until they can take a break. Students with fewer cognitive challenges are also learning about proper nutrition while working with staff during running club outings.

There have been a lot of surprises.  It was never expected that some of the kids jogging and even walking without prompting.  The kids genuinely like it and have fun doing it.  Some of them have lost weight, and many of them are a lot calmer for the rest of the day after getting out for some physical activity in the morning.

Johannes runs with a particular student every Monday. He loves trying to break his record and feels so proud of himself afterward.  One of the things his mom stressed when he became part of the running club was that he had little to no self-confidence, and she’s very happy that running seems to have helped immensely with his self esteem. To keep him motivated, he is given some kind of award certificate every time he breaks his record.

Randy, Johannes and Chickie believe this model could work for other agencies, because it doesn’t require anything complicated.  Just keep the goals simple, and as long as safety, transportation and staffing aren’t issues, any school can start a running club.

We had the best Saturday night ever! Julie treated the Difflearn gals to the taping of the Night of Too Many Stars: An Overbooked Concert for Autism Education at the Beacon Theatre in NYC.

Hosted by Jon Stewart, we were treated to side-splitting appearances by Tina Fey, Chris Rock, Ricky Gervais, Steve Carrell, and many others with live performances by Sharon Jones and the Dap Kings!

We won’t spoil it for you – the show is going to air on October 21, at 9 pm EST on Comedy Central – but some highlights included how much people will actually pay to meet George Clooney and what it’s worth to have Chris Rock call someone you’re really mad at. Temple Grandin was in the audience and our good friend Dr. Bridget Taylor was featured in one of the segments.

The event was incredible, both in the hilarity of the performers and in the intense generosity of the attendees. We were particularly impressed at how tuned-in the organizers were to the real and pressing needs not just of children with autism, but of their families and their futures and how it will continue to impact them across the lifespan.

This is the third time that Jon Stewart has teamed up with Comedy Central to put on this event and to date, they have raised more than $7 million for autism education!!!!

The money raised benefits a variety of autism education and family service programs across the country. In 2008, the benefit raised over $2.8 million dollars, with money going to:

This year, one of the new initiatives is the Institute for Brain Development, an all-inclusive center positioned to undertake collaborative research into the most effective treatment of autism spectrum disorders. It will be a collaboration between New York Center for Autism, New York Presbyterian and it’s medical schools of Columbia University College of Physicians and Surgeons and Weill Cornell Medical College.

Please tell your friends and do tune in on October 21 at 9pm. The show is fantastic and there will be more opportunities to contribute to an excellent cause.