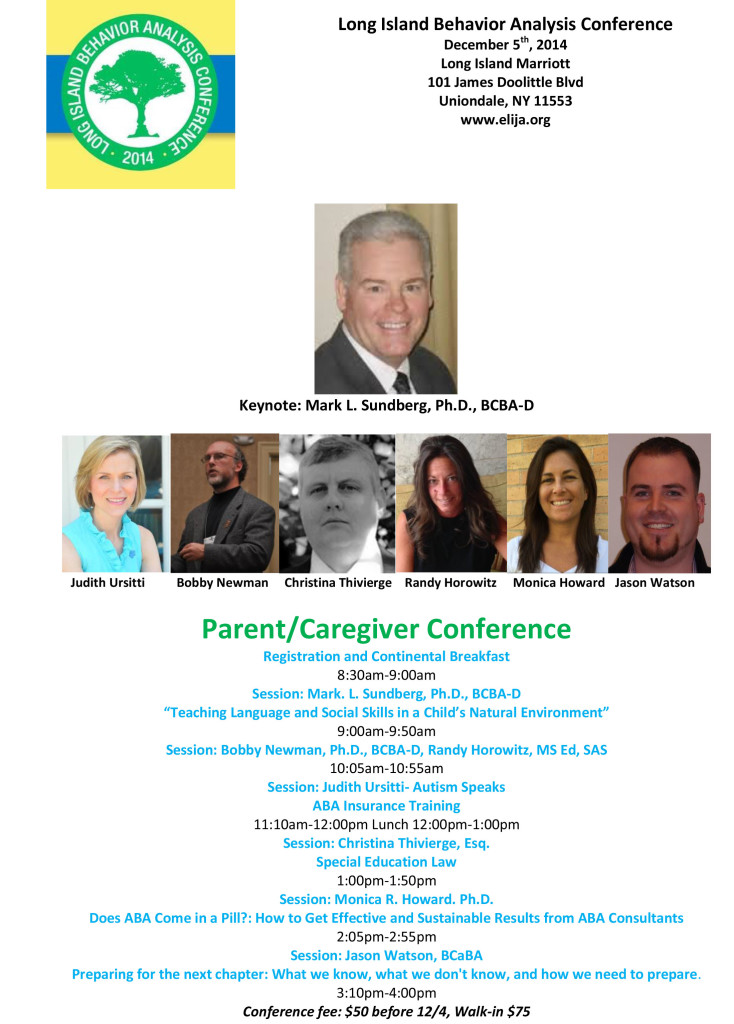 We are so excited to be a part of this upcoming Long Island Behavior Analysis Conference! The conference will be held at the Long Island Marriott in Uniondale, New York. Registration information can be found here.

With keynote speakers Mark Sundberg, PhD, BCBA-D and Patrick Friman, PhD, ABPP, this 2-day conference will be a great opportunity to hear about what is going on in the field of ABA. Sessions include “Teaching Language and Social Skills in a Child’s Natural Environment”, “The Role of Play in ABA Programs: Analysis, Assessment, and Intervention” and “That’s Not What I Recommended! Merging Treatment Integrity with Reality to Support Caregivers with Behavioral Recommendations in the Home.”

Come say hi! We will have a table at the conference, where we will be selling the VB-MAPP, Teaching Language to Children With Autism, ABA Curriculum for the Common Core: Kindergarten, and a number of our other favorite titles and products – all at discounted prices!

This conference is geared towards ABA professionals, with Type 2 CEU’s available. There is also an alternative track for parents interested in attending.

Last week, we discussed a comprehensive checklist for parents in placing their children in the right school environment. Service providers in special education programs play a vital role in students’ daily lives at school and are expected to understand certain protocols when behavioral difficulties arise. We couldn’t think of a more appropriate article than that of Bobby Newman, PhD, BCBA to shed light on this need for crisis intervention training in order to ensure the best learning environment for students.

On the Need for Crisis Intervention Training
by Bobby Newman, PhD, BCBA-D

It was one of those moments in life that seemed scripted. A colleague and I were being given a tour of a public school, a prospective placement for a student of my colleagues. The student in question had a history of aggressive behavior towards staff and bolting from the classroom towards the street. How such physical crises were going to be addressed was thus a major concern of mine. I asked the tour guide, the principal of the school, how such matters were handled and whether staff were formally trained in any crisis intervention philosophy and techniques. She informed me that they were not, but that there were “informal things that staff had taught one another.”

As if on cue, at that very moment a student came sprinting past us, with a staff member in pursuit. The staff member reached out and grabbed the sprinting student by the back of the collar, effectively stopping him by choking him with his shirt. My usual flimsy professionalism couldn’t survive this seemingly scripted moment, not to mention the loud choking noise, and I asked, “Is that one of the things staff have shown each other?”

Further questioning revealed that when students had serious outbursts, 911 was called. My mind went to Chicago where in 2012, police were called to the home of a child with autism during a behavioral crisis with tragic results. Very little else needed to be known to determine that the student’s parents would never agree to this school placement, and I couldn’t say that I blamed them.

Crisis intervention is one of those very sensitive issues in the field of developmental disabilities. There are people who want to ban the physical portion of crisis intervention training, either due to liability concerns or perhaps due to abuse concerns. I will agree that the potential for abuse exists if staff are allowed to put their hands on students/consumers. I will argue, however, that the possibility of abuse is much greater if we do not train and if we do not have formalized systems in place, or at least for mass exclusions of people from less restrictive settings due to the inability to maintain them there safely in such environments. Let me develop my argument:

I wish to emphasize that a crisis is NOT an everyday occurrence. A crisis should not be routine, it should arise as a relatively infrequent occurrence that needs to be dealt with via crisis intervention protocols at that moment. I wish to distinguish crisis intervention from “behavior treatment plans,” which must be in place for behavior we often see from the individual in question. If you’re doing crisis intervention frequently, then this a matter for discussion of alterations to behavior management plans or resource allocation/availability. Crisis intervention is not a consequence meant to change the probability of behavior via a punishment contingency, and any physical interventions where one must put their hands on a student should be a last resort.

Even with this caveat in place, some would make the argument that crisis intervention training should not be provided, that it gives staff permission to be overly physical with students. While I will grant such a possibility exists, as I always tell my ethics classes, the argument about what you are not willing to do is not enough. One must be prepare to answer, “and then what?” Suppose staff were not trained. When a crisis occurred, they would be left with “doing the best they can” or otherwise improvising in the moment. Given this set of circumstances, staff would respond in their own ways to crises and injuries and abuse become probable, not just possible, as staff panic or lash out with whatever self-defense techniques they can think of or act in keeping with a faulty knowledge of body mechanics or physical hazards (witness the “choke stop” described above).

To summarize, the implications of the “do not train” argument are:

What must be appreciated is that good crisis intervention training systems are based on sound behavioral principles, providing the supports the individual needs, rather than on controlling the behavior of the individual physically. The vast majority of crisis intervention training is based upon preventative measures that aim to teach the individual self-control and alternate behaviors, and to create settings that are not likely to create crises in the first place, rather than sheer physical intervention. Should a physical intervention be needed, safety is a foremost concern. Techniques are performed in such a way as to attempt to minimize injury. No technique, for example, is meant to cause pain, is meant to scare, uses impact for behavior control, or moves a limb beyond its normal range of motion.

To sum up the basic argument:

This seems to me to be our best bet for creating programs that are humane, not emotionally reactive, and encourage the development of effective problem solving strategies that rely on behavioral interventions, rather than relying on physical intervention by staff to keep everyone safe. This seems to me to be most consistent with ethical practice of Applied Behavior Analysis.

Bobby Newman is a doctoral level Board Certified Behavior Analyst and Licensed Psychologist. Bobby is the first author on twelve books and has published over two dozen articles in professional journals, as well as numerous popular magazine articles and has hosted two series of radio call-in shows. Bobby is the Past-President of the Association for Science in Autism Treatment and the New York State Association for Behavior Analysis. A popular speaker, Bobby also provides direct treatment, staff training and consultation around the world, and has been honored for this work by several parents and professional groups. Bobby is a SCIP-R (Strategies for Crisis Intervention and Prevention, Revised) instructor and has published a manual to accompany crisis intervention training (Gentle Redirection of Aggressive and Destructive Behavior). In addition to his other clinical work, Bobby teaches non-violent crisis intervention philosophy and techniques for schools, agencies and families.