This week’s post comes to us from Stephanny Freeman, PhD and Kristen Hayashida, MEd, BCBA, and Dr. Tanya Paparella, our partners on the Play Idea Cards app. Play Idea Cards is a full curriculum on teaching play – right in the palm of your hand! Check it out on the Apple App Store! 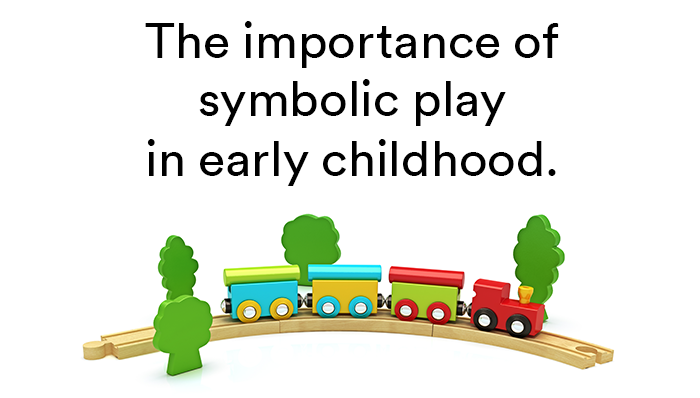 Most adults think of toy play as a natural part of childhood.  When my daughter was born, we were showered with plush animals, tea sets, and dress up clothes for her to use in play.  But what happens when the child does not find toy play to be natural?

Many children on the autism spectrum use toys non-functionally or repetitively.  When I ask parents of children with ASD to tell me about their child’s play they often say “he doesn’t know how to use toys appropriately!”  They then tell me about how the child may spin the wheels on the car while staring at the rotating objects.  They tell me about the specific scripts the child uses to carry out a routine with their toys and subsequent tantrums if the routine is disrupted.  Parents notice how this deficit in play impacts their ability to engage with peers or occupy their free time appropriately.

Symbolic play occurs when the child uses objects or actions to represent other objects or actions.  For example, a child using a doll as their baby and rocking the doll to sleep is an act of symbolic play.  The doll is not alive, but the child is representing a baby.  This skill is a core deficit in children with ASD.  This means that they do not “naturally” or “easily” acquire the ability to use toys to represent other things.  Development of symbolic play is crucial in early development and is tied to numerous subsequent skills:

Meta-cognition and Problem Solving Skills: meta-cognition is the ability to think about one’s own thinking.  This is an essential skill when solving problems and planning one’s time.  During play kids plan, organize and cognitively process through obstacles and mishaps with their toys.

Emotional Development: through symbolic play, children can practice expressing emotion through the scenes they create.  There is also some evidence suggesting that this early practice contributes to emotion understanding and empathy.

Clearly, children need play for growth and development.   However, for children with ASD the development of symbolic play may be difficult and, even thought of as WORK!

Given the numerous skills that come out of symbolic play, we urge parents of children with ASD to consider the importance of toy play.  Dedicate time and effort to engage your child in symbolic play.  It is usually not easy at first!  It might have been decades since you picked up an action figure and used him to fight off bad guys, but practice with your child.

Parents know that it is part of their job to help their child learn to read and do basic math.  They would not let their child escape those tasks because they are hard.  Please consider PLAY to be just as important and necessary for the child’s development.  Even if it is work at first, insist the child play with you and in time, improvements may come not only in toy play but also in so many other key areas of development.

Dr. Stephanny Freeman is a clinical professor at UCLA, a licensed clinical psychologist, and Co-Directs the Early Childhood Partial Hospitalization Program (ECPHP).  For 20 years, she has educated children with ASD and other exceptionalities as a teacher, studied interventions for social emotional development, and designed curriculum and behavior plans in school and clinic settings.

Kristen Hayashida is a Board Certified Behavior Analyst at the UCLA Early Childhood Partial Hospitalization Program (ECPHP).  For the last 10 years she has served as a therapist, researcher and educator of children and families living with autism spectrum disorder through the treatment of problem behavior.

Dr. Tanya Paparella is a specialist in the field of autism having spent more than 20 years in intervention and research in autism. She is an Associate Clinical Professor in the Division of Child Psychiatry at UCLA, a licensed clinical psychologist, and Co-Director of UCLA’s Early Childhood Partial Hospitalization Program (ECPHP), an internationally recognized model treatment program for young children on the autism spectrum.

As a mom of a three-year-old with autism, sometimes I’m hesitant to visit places that are overcrowded with people. I always worry that my son Julian will become overwhelmed and have a meltdown. Recently, his daycare took him on a trip to Sesame Place, and despite my worries, I decided to attend. I also invited a friend who has a five-year-old son with autism named Brandon (who is one of Julian’s BFFs).

I created a social story for Julian and told him about all of the characters he would see when we went there. I let him know that we would be playing in the water, going to see Elmo, and that we were going to go on fast rides that went up and down. I spoke to him about Brandon coming with us and how we would be taking a bus. He was very excited and told me he was very happy; or, in his words, “Mommy, Juju happy” (he refers to himself in the third person and always calls himself by his nickname).

The morning of the trip it was a little shaky; we took a car to his school (he was not happy about this because Mommy had only mentioned a bus). When we got on the bus, he was upset and overwhelmed with all of the new changes in his routine. I won’t lie — I was feeling a little overwhelmed myself. It took about 15 minutes for him to calm down, but after that he watched the cars as they drove by and ate lots of snacks, watched parts of a movie that was playing, and climbed all over me. In the end, he didn’t scream and cry the whole time, he didn’t get sick, and best of all, we made it in one piece.

When we arrived at Sesame Place we went straight to the Welcome Center, which was right by the entry gates and, oddly enough, not packed. I told the woman at the desk that we were traveling with two amazing little boys with autism. We were asked basic information like our boys’ names, birthdates, heights and addresses and we were each given a plastic wrist band with the numbers 1-3 on it (each number had a tab that ripped off the band) for water rides. This wristband allowed us to enter the rides through “Abby’s Magic Queue” and skip the long lines 3 times (good for 4 people each time). We were also given a small card with the numbers 1-6, which allowed us to ride 6 dry rides (good for 4 people each ride). We also rented a double stroller for less than $20 which allowed us to stroll both boys and carry our bags easily.

First we did the water rides. We went on a raft/slide ride near the entrance about 4 times in a row. Lucky for us they didn’t ask for any of the tabs. Both boys had a hard time waiting their turn but equally loved the ride; the smiles on their faces were priceless. Next we did the lazy river (for this ride they took one of our tabs); we were able to do this one twice as well. There are some parts on the lazy river where you will get splashed or sprayed by water; we just used ourselves as shields to block them (none of the boys like water in their faces). By the time we finished the lazy river, it was time for lunch. We had chicken fingers and French fries (which only came out to about $30 with a souvenir cup and plate).

Next we went on the dry rides and did just about everything in the Elmo’s World section of the park. For the dry rides we went to the exit and handed our cards to the attendant. They crossed off one number from the card and we were allowed to board the ride first. We had lots of fun on the spinning cups and air balloons. Apparently Julian has a thing for rides that go high in the air (me, not so much; I am afraid of heights). We also went to take a picture with Abby and Elmo, and we were super lucky that there was no line at all.

When it was time to leave, we got to watch some of the parade and wave to some of our favorite characters. Julian was very upset that we had to go and started to cry. Brandon was able to help soothe him by taking his hand and telling him that he was going to be ok. Julian slept the whole ride back on the bus after having some snacks and water. At the end of the day, we actually had a great time despite the normal meltdowns and moments of overstimulation. I was so happy that he had gotten to experience Sesame Place just like any other kid would.

I wrote this blog to encourage other moms of children with disabilities to try and worry less about all the things that can go wrong when experiencing new things, and to take the risk and go for it. Inclusion is one of the most amazing things that places like Sesame Place offer, and best of all, there are supports in place to support our kids. Of course there are going to be bumps in the road, but it’s nothing different than the ones we face every day. Go out, try new things, and follow your child’s lead; the worst thing that can happen is a meltdown (we deal with these anyway). But the best thing that can happen is the making of incredible memories.

Millicent Franco is the Program Intake Coordinator for INCLUDEnyc. Millie helps coordinate services for Spanish bilingual families through the help line. Prior to joining INCLUDEnyc, she was a Family Support Worker via Healthy Families New York where she provided families with child development information/activities in order to help create a community of informed parents raising secure children. She also brings previous experience as a Case Manager for Turning Point’s transitional housing program. She is the proud mother of an amazing little boy with Autism and wants to help break the stigma associated with having special needs.