In this month’s ASAT feature, Maithri Sivaraman and Ruth Donlin offer advice on selecting the best games for children with ASD. To learn more about ASAT, please visit their website at www.asatonline.org. You can also sign up for ASAT’s free newsletter, Science in Autism Treatment, and like them on Facebook!

My son is 5 years old and was diagnosed with autism when he was two. He has responded well to early intervention services in terms of his communication and daily living activities. But it is still challenging to for him to play games with his neurotypical peers. When all the kids at a birthday party are playing “Simon Says,” my son prefers to play alone with his toys or just watch the other kids playing. I don’t know how to teach him to play new games or even identify what kind of games he likes. Could you provide some suggestions?

The growing awareness about the early signs of ASD has made it possible for an increasing number of children to be diagnosed by the age of 3 years (Stahmer, 2011). Considering the difficulty in building social relationships and peer play that is often associated with ASD it is important that specific instruction on social behaviors in various play situations is provided.  Research has shown that extensive and planned interaction with peers facilitates social skill development (e.g., Krantz & Mclannahan, 1993; Baker, Koegel & Koegel, 1998). At your son’s age, this interaction primarily occurs during play.

Play has been described as a “child’s workshop” where social rules and consequences are explored (Bruner, 1975). Teaching a game to a child has consequences beyond the game itself: Apart from having fun, it could lead to social engagement, formation of friendships and create abundant opportunities for imitation, negotiation, cooperation, and other skills. However, though important, teaching games to children with autism often involves many challenges, such as the play activity not being motivating to the child, the need for intrusive prompting, having to teach the rules of each game, and managing problem behavior, to name a few.  Some of these challenges can be overcome by using the strategies described below.

Considerations When Choosing a Game

Choose a game that is a match to the child’s developmental level and one that incorporates his or her interests and facilitates social skill development. Games may provide an appropriate social context to the perseverative interests of children with ASD (Koegel et al., 2012; Baker, Koegel & Koegel, 1998). It is a great idea to modify games to accommodate the child’s interests. For example, if the child has a keen interest in vehicles, the Red Light/Green Light game can be modified to be played with cars rather than people. A perseverative interest with names of washing machine brands can be accommodated in the same game by asking the child to take a step forward each time one brand name is said or stop when a different brand is said. For a child who likes twirling threads, the thread could be at the finish line to motivate the child to “go” during Red Light/Green Light.

Children with ASD are less likely to learn age-appropriate play skills through mere exposure to play materials and peers using those materials. Instead, intervention is often required to teach appropriate play skills directly and explicitly to these children (Lifter, Mason & Barton, 2012; Malone and Langone, 1999). When planning for social interactions and game play with others, the child with autism should understand what to do before being placed in the social play situation and have appropriate supports to avoid failed social experiences that could decrease long-term interest in the activity. Some strategies for teaching games follow.

Assessing motivation – How to tell if the child is interested?

Gauging child motivation for an activity is as important as knowing how to teach a game. Being indifferent to a child’s interest level and focusing only on the process can impede his/her ability to play games (Taylor et al., 2005). The overwhelming urge to teach the child to play by all the rules of the game on the very first opportunity can be truly aversive for the child (and the parent or teacher!) and lead to problem behavior. A closer observation might reveal that problem behavior occurs when the child’s interest in the game starts to wane and continued engagement is expected.

This challenge can be overcome by taking motivation into consideration and choosing games that have components which you know the child enjoys. This increases the likelihood that the learner will exhibit independence in at least one of the expected play behaviors during the game. The Red Light/Green Light game might work well for children who like to run or be outdoors; Simon Says might work for children who have a good imitation repertoire; Hangman may be motivating for children who like letters; and simple board games like Tummy Ache/Pizza Pizza (Orchard Toys) may be enjoyed by children who prefer visual stimuli and matching.

Additionally, here are some ways of measuring motivation during the game (Ward, 2011).

If the game has been broken down into doable steps with appropriate reinforcement and the child is still not initiating or displaying independent play actions, these are clear indications of low motivation in the game, which can be also due to task difficulty. If such situations persist, it is best to choose a different game. Identifying a child’s disinterest and knowing when to stop, or modifying a game in a manner that might enhance motivation, can facilitate success.  Motivation can be fleeting: what was fun yesterday might not be fun today. But being proactive about gauging these variations is what should be lasting.

We have learned many effective ways to teach games over the years (Jung, 2013; Krantz & McClannahan, 1998; Maurice, Green & Luce, 1996; Stahmer & Schreibman, 1992). Since playing games is an important activity among typically developing children, play activities serve as an opportunity for children with ASD to learn appropriate social behaviors (Davis-Temple, Jung & Sainato, 2014). Whatever the goals associated with each game, adding “having fun” as one of them, and identifying and monitoring observable measures of enjoyment, may be the key to successful game instruction. Being process-oriented and showing our kids that games can be fun is more important than playing the game the right way.

Baker, M.J., Koegel, R., & Koegel, L. (1998). Increasing the social behavior of young children with autism using their obsessive behaviors. The Journal of the Association of Persons with Severe Handicaps. 23, 300-308.

Davis-Temple, J., Jung, S., & Sainato, D. M. (2014). Teaching young children with special needs and their peers to play board games: Effects of a least to most prompting procedure to increase independent performance. Behavior Analysis in Practice, 7(1), 21–30.

Stahmer, A. C., Akshoomoff, N., & Cunningham, A. B. (2011). Inclusion for toddlers with autism spectrum disorders: The first ten years of a community program. Autism: The International Journal of Research and Practice, 15(5), 625–641.

Ward, S. (2011). What you need to know about motivation and teaching games: An in-depth analysis. Lulu.

Maithri Sivaraman is a BCBA with a Masters in Psychology from the University of Madras and holds a Graduate Certificate in ABA from the University of North Texas. She currently runs ‘Tendrils Centre for Autism Research and Intervention’ which is a registered resource center providing behavior analytic services to families in Chennai, India, conducting workshops, and supervising students pursuing certification. She has presented papers at international conferences, published articles  in peer-reviewed journals and has been authoring a column for the ‘Autism Network’, India’s quarterly autism journal. As an Extern at the Association for Science in Autism Treatment she has been involved in the international dissemination of evidence-based treatments writing articles for their newsletter and responding to media reports that highlight treatments for autism.

Ruth Donlin, M.S., is a Board Member of ASAT since 2010 and on the Public Relations Committee. She is a consultant in private practice based in New York, and has provided consultation to schools, agencies, and home programs for children and adults on the autism spectrum for 20 years. She presents on a variety of topics such as managing challenging behaviors, using visual supports, team dynamics, and social skill development at conferences regionally, nationally, and internationally. Ruth is Past-President of the Autism Special Interest Group (SIG) of the Association of Behavior Analysis International.

We’ve marked down prices on more than 40 different products to make room for all of the new and exciting additions in our 2015 Catalog (Vol. 33), so you can SAVE UP TO 30% on puzzles, timers, manipulatives, games, schedules, and more! We still have a few left in stock, but they’re going fast, so act now before they’re all gone!

No promo code necessary. To request a copy of our newest catalog, click here! 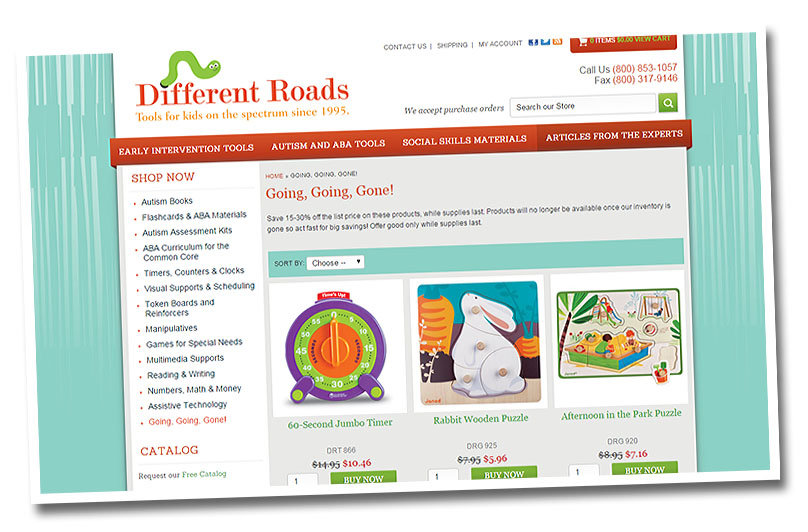 Around the holidays, parents often get calls from grandparents, friends and relatives asking for gift ideas for children with special needs. Our 2014 Holiday Gift Guide will make it a bit easier for everyone to find something special for the special child in their life. Our trusted consultant Sam Blanco, MSEd, BCBA has put together some of her favorites that are sure to bring delight. From our Different Roads family to yours, we wish you all the joy and happiness of the season. 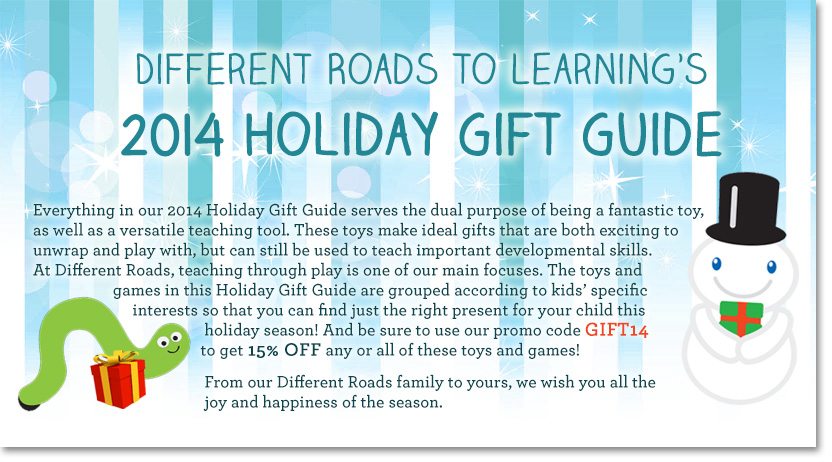 AND we’re slashing the prices of the toys and games in our Holiday Gift Guide, so be sure to apply or mention our promo code GIFT14 to save 15%* on these featured products!

We’re in absolute love with these new wooden puzzle games. How to describe all of the skills these three new games address? Each one is a beautiful wooden puzzle that comes with a booklet of patterns that  the player must recreate. They range from simple to challenging, even for the most experienced builders. Each game stretches a player’s logical thinking skills, develops spatial reasoning and problem solving skills. All of the feedback we’ve received tells us that your kids won’t notice any of that – they’ll be having too much fun playing.

For the teachers out there, if you have a student that isn’t interested in blocks but is crazy for cars or captivated by castles, these are the games for you! Each puzzle has a clear beginning, middle and end so they require less support, making them ideal for centers, activity schedules and independent play. 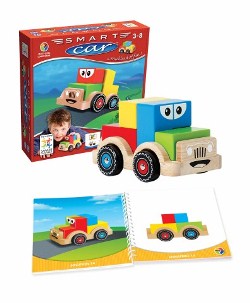 This is a truckload of fun that evolves with a child’s growing and expanding skill set. The four included pieces produce 48 unique shapes and patterns! Younger players will love playing with the adorable block pieces and creating their own models while older players will be stimulated by the challenge of building a car to match the puzzle design booklet. Recommended ages 3 and up. 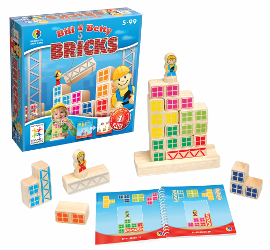 Little builders will have their work cut out for them as they create constructions using these brightly colored wooden blocks and figurines. Bill and Betty need to have their feet on the building at all times to supervise the work – and provide an added challenge. For students who love to build but resist incorporating figurines into play, Bill & Betty Bricks is a great solution. By pairing construction with characters and making them an inherent part of the game, players will receive a gentle introduction to the world of imaginative play. There are more than 60 challenges in the included booklet that range from simple to “wizard-level” so players of all ages will be engaged and motivated. Recommended ages 5 and up. 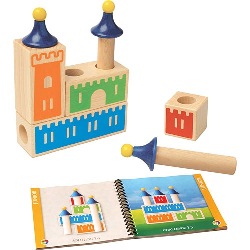 The challenge of this beautiful 3-D wooden puzzle is to assemble the blocks and towers into one of the castle designs in the booklet. From simple puzzles for inexperienced builders to complex puzzles that will challenge skilled architects, Castle Logix is designed to stretch a player’s logical thinking skills and develop spatial reasoning abilities. It includes seven durable wooden castle pieces and a full-color, illustrated booklet with 48 multi-level puzzle challenges. Recommended for puzzlers ages 5 and up.

This week only, save 15% on these versatile new games by entering the Promo Code BLOGBCT9 at checkout.

*Offer expires on March 26, 2013 at 11:59 pm EST. Not compatible with any other offer. Be sure there are no spaces after the Promo Code when you enter it at checkout.