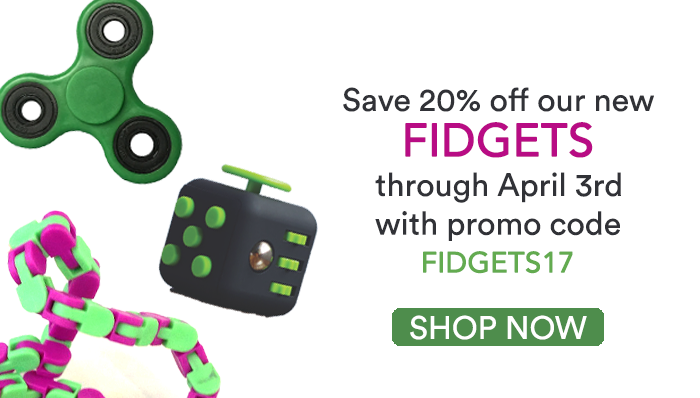 This week only, save 20% off your purchase of these select fidgets by using promo code FIDGETS17.

*Promotion is valid until April 3, 2017 at 11:59pm ET. Offer cannot be applied to previous purchases, combined with any other offers, transferred, refunded, or redeemed and/or exchanged for cash or credit. Different Roads to Learning reserves the right to change or cancel this promotion at any time. To redeem offer at differentroads.com, enter promo code FIDGETS17 at checkout.

With the holidays approaching we all know that gift giving will soon be in full swing.  This undoubtedly means that your families will be generously bestowed with electronic cause and effect toys.  These types of toys help to stimulate development as your child discovers the function of the toy and how to elicit certain responses from the object.  Children with special needs tend to have a longer relationship with these types of toys as they often serve as powerful reinforcers, meet ongoing sensory needs and continue to provide opportunities to address language and motor development.  Additionally, it may take a special needs child longer to master this type of play before moving onto more imaginative and creative play.  What I’m getting at is that these toys are going to be in your house longer and some of them are LOUD.  So when I came across the following post on Apartment Therapy the other day it jumped out at me as a piece vital information for all of you special needs parents out there.  We are always thinking about adaptations for toys and games for the kids but what about the parents?  A former sound engineer for children’s sound books shares a secret on how to turn down the volume on these toys.

Check it out and Happy Holidays!

Bringing Down the Volume on Electronic Toys

We’ve been through a ton of stimming.  Pin wheels, spinning toys, pouring sand, watching water move from container to container were all familiar stims at our house.

This behavior started very early, at age 3.  We were unable to control the behavior.  Instead by the time she was 5, we wiped out magazines, hid books and reams of paper, everything flippable was gone from the house.  We never read a newspaper, never looked up a recipe in a cookbook and kept computer paper high up on the shelf.

Many years, later, that same obsession is a power reinforcer.  The magazine is controlled under specific circumstance, perhaps a haircut or a difficult medical treatment.
The whole premise of Applied Behavior Analysis is working to get what you want. As Joanne Gerenser used to say, “Most people work for the most powerful reinforcer: Money!”

I wish we had understood and used the concept of reinforcement at the beginning and used it to the family’s advantage.  I was too scared to introduce it but braver parents can use those stims and obsessions to shape behaviors and make life smoother by creating the right delivery of rewards.

Many children look forward to Halloween with the costumes, candy, parties and being with friends.  However, for parents of children with autism the approach of October 31 and the extra challenges might bring about stress and anxiety.  Here are some tips to help it go more smoothly.

Check out our new YouTube page, it’s a work in progress but we hope to do all the work for you in finding relevant clips for teaching and reinforcement.

I couldn’t even begin to count how many times I’ve been asked this question. It is an issue that I love to tackle in collaboration with the families that I work with mostly because when progress is made, it makes such a dramatic difference in the well-being of the entire family.

Behavioral and sensory issues of a child with special needs can further complicate the ordinary mealtime struggles of a parent of a small child. Parents are often torn between the interventions outlined for them by therapists and the reality of everyday life. This usually means that at the end of the day, just getting the child to eat anything and by any means necessary. No one is happy when mealtime becomes a battle zone. Use of a token economy or escape extinction is most common and can work if implemented consistently. However, I am always impressed when I come across new and creative approaches to food and feeding issues.

One such example of creativity comes from my experience with a great family and their two young boys that I worked with for several years. Their mother was a force to be reckoned with when it came to approaching the introduction of new foods and organizing play dates. I don’t remember how it started, or if it was a conscious plan but the weekly play dates she organized for socialization quickly evolved into preschool foodie events. The children were much more likely to try new foods and like them when their peers were trying them too. It was also a great opportunity to work through sensory aversions and begin to enjoy getting messy. I was recently reminded about these special food play dates when I came across a post on https://special-needs.families.com about a food centric play group started by some parents in Texas.
Currently I am experimenting with new ways to expand the diets of the children on my caseload as well as improving my own health through my food choices. My own mantra for health is to “Eat the Rainbow” so that I make sure I get a nice mix of fruits and vegetables. In my research I came across a great book for one child who has a strong interest in letters. The book is “Eating the Alphabet” by Lois Ehlert and it has inspired a new token economy type system for him and his siblings. Check out the template for the chart in the DRL Downloads! All you have to do is add your child’s picture and a picture of anyone else in the family wanting to participate, laminate, start checking off new foods with a dry erase marker and let the eating begin!
What have you tried?