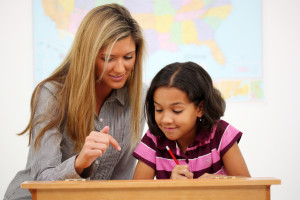 Teaching learners with autism or other developmental delays can frequently be a complicated, stress-inducing labor of love. This is why I especially appreciate that one of the most useful strategies in working with learners of all ages is just three simple words: “Do it again.”

The basic idea behind “Do it again,” (Or “Try it again,” or “Do it better”) is that you are calmly stating that the learner must try an action again and do it better than previously done. You are not yelling, you’re voice isn’t even raised. And you are communicating to the learner that you know he/she is capable of doing more.

In some cases, working with learners who may require more invasive prompts such as physical prompts, it may be necessary to have two adults for this to work best. Below are a few example scenarios of how this might work.

Behaviors to use this with: