This piece was originally posted at www.aba-interventions.com.

Elizabeth Ginder, MSSW, BCBA, LBA is the Clinical Director of ABA Interventions, LLC. Elizabeth specializes in working with children ages 2 through early adulthood. She has experience working with children diagnosed with intellectual and developmental disabilities, as well as children with severe, challenging behaviors. Elizabeth also has a strong background in parent, teacher and staff training. Her focus is on verbal behavior, skill acquisition and teaching children how to have fun! You can find more information on ABA Interventions at their Facebook page or at www.aba-interventions.com. 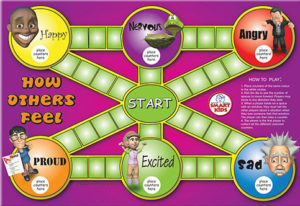 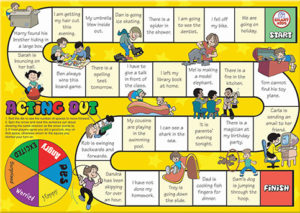 Social skills are important for any developing child as they teach and reinforce important skills children need as they interact with their peers, family members and community helpers. Be sure to check out our featured game, a value set of six visually stimulating board games targets good social skills and behavior.

The six games included in the set cover Morals, Manners, Empathy, Showing Emotions, Friendship, and Managing Emotions. Each game supports the development of social and emotional skills and the consolidation of those already learned.

This set of board games provides a comprehensive approach to promoting the social and emotional skills that underpin effective learning, positive behavior, regular attendance, staff effectiveness, and the emotional health and well-being of students.

This week only, you can save 20% on your purchase of select Social Skills Games by entering the Promo Code SOCGAME20 at checkout!

Margery F. Rappaport, MA, CCC-SLP, is a speech-language pathologist in private practice in New York City. I feel very fortunate to have a colleague as experienced as Margery that I can turn to for advice and guidance.

So, I thought I could share some of her wisdom and experience with a three part ‘Question and Answer’ post. This is only the first question folks. Stay tuned for more!

I am always interested in learning what has drawn a person to a particular field or occupation. What led you to a career as a Speech-Language Pathologist? And how did you find yourself working with children diagnosed with autism spectrum disorders in particular?

A lifetime spent in helping people find their own voices may have, in my case, been preordained (if you believe in that sort of thing). After all, more than one psychic has told me that I was born under a ‘communication star’.

As an infant, 11 months of age, my mother suddenly left for a year due to severe illness. At this preverbal age, I learned the torment of being unable to communicate ones feelings and questions in words. As an adolescent with creative tendencies, I studied music and dance, and majored in theatre in college, setting out to become a professional singer. Along this path, I struggled with vocal cord nodules and was put on complete voice rest several times. As I began to question my show business career choice, which was feeling increasingly unsatisfactory, fate intervened. On a flight from New York to Boston, I chatted with a charming, articulate woman in the seat next to mine. Before landing, she said, “You realize, of course, that I am a severe stutterer”. When I registered my amazement since I had detected no signs whatsoever of a speech problem, she said “Well, I have had a lot of therapy”. Astonishing thought! People who were unable to easily express their feelings, fears or questions can change. With help and guidance they can be released from this exile. Her situation reminded me of Jean Paul Sartre’s play, No Exit, where the characters are confined in a room in hell. This woman had been trapped within herself, with no avenue of escape until she received this therapy.

Being able to communicate is so much of what it means to be human, and this notion, that impediments to communication, even severe ones, could be helped, resonated within me on many different levels. To learn more about the field, I found a secretarial job in the philosophy department of Columbia University’s Teachers’ College which allowed me to take free courses at the University. After one year and two courses in the Department of Speech-Language Pathology, I was accepted into the program on a full scholarship plus a stipend to pay my rent and buy groceries. Once in the program, I began to see how Speech Pathology allowed me to tap into dimensions of my personality that show business never had. I found great satisfaction in helping people free their expression. I was enormously stimulated intellectually by the study of neuroanatomy, linguistics, child development, psychology and the evolution of language. I came to specialize in working with children because I found they were ‘in the present moment’ and intrinsically imaginative and creative. I enjoyed working intimately with mothers on the most cherished thing in their lives, their child’s well-being. Like work in the theatre, I enjoyed the comradery of working on a team including the child, the parents, doctors and a multitude of other therapists toward one powerful goal. All these aspects of the work tapped into my essential being. I had found my life’s work. I recall a day towards the end of my training, standing in line for afternoon tea at a resort hotel in the mountains. The beautiful day room was filled with afternoon sunlight and as I thought about my impending graduation, I clearly remember thinking that I was born to do this work.

After working in clinics, hospital child evaluation units and then the Head Start program, I opened a private practice at about the time that the autism epidemic began to explode. With more good luck, I connected with professionals who were establishing groundbreaking interventions for children with autism, thus deepening my understanding and passion for helping children with severe communication challenges.